Washing your hands is one of the easiest and most well-known methods of preventing the spread of germs. And of course, you, dear reader, always wash your hands properly with soap, don’t you? Unfortunately, even if you do, plenty of other people don’t. It may even be the case that you aren’t washing as well as you thought either.

Being asked about one’s bathroom handwashing habits is a bit of a moral conundrum. Everyone knows they’re supposed to wash their hands, but that just means that people are more likely to stretch the truth when self-reporting their habits. A 2010 study by Harris Interactive found that a whopping 96% of people claimed that they always wash their hands after using the bathroom. However, a study performed in a college town by discreetly observing people washing their hands found that 10.3% of those observed made no attempt at all, 23% attempted to wash with water only (if you can consider that an “attempt”), 1.2% did not dry their hands, and only 5% spent more than 15 seconds washing their hands (compared to the CDC’s recommended 20 seconds).1 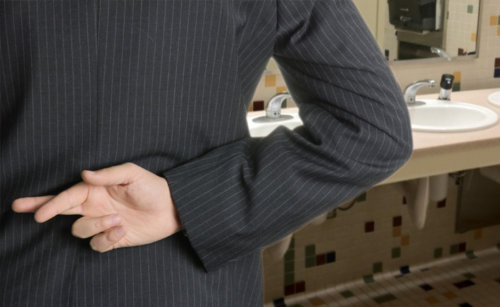 Even soap can’t wash the guilt off these hands.

But hey, they’re trying, right? It’s the thought that counts! Water alone made the visible dirt go away, so is soap even really necessary?

Well, no matter where you are on your personal handwashing journey of life, there’s a good chance you don’t know all there is to know about the topic.

What does soap even do?

For the moment, let’s ignore antibacterial soap and consider soap in general. Soap is not a mystical elixir that cleanses everything it touches, and neither is water for that matter. In fact, soap itself is not even an inherently clean substance. Even a soap dispenser can become contaminated if not properly cleaned periodically. (To avoid contamination, don’t “top off” refillable soap dispensers. Instead, clean out the remaining soap between refills or using self-contained refills like our foaming hand-soap does.)

Soap is a chemical tool that helps to physically remove oil from a surface, and thus microbes and dirt along with it. Your hands have oils on them and, by definition, oils do not mix with water. Therefore, if you were to wash your hands with water alone, it would be much more difficult to remove the oils and the bacteria within. If no soap is available, washing with water only can still do a significant amount of cleaning, but it’ll take a whole lot of scrubbing to get that oil off. With soap, those oils will be literally pulled off at a molecular level and can then be rinsed away far easier. It’s basically magnets, but chemically. An artist’s rendition of how soap works.

The study usually referenced regarding handwashing hygiene is one that was performed in rural Bangladesh. In this study, cases of diarrhea in children were compared between households that washed their hands before preparing food and those that didn’t. They found that monthly diarrhea cases went from 12.5% without washing hands, to 6.9% when washing both hands before preparing food, and down to 3.7% when at least one hand was washed with soap.

Your goal with handwashing is to get bad stuff off of your hands. You can do this by scrubbing with water, but soap will help pull off the oils with significantly less scrubbing. Not much is going to come off your hands from a two-second rinse; you need to physically force it off. Twenty seconds of washing seems to yield maximum results, but I wouldn’t blame you if you only spent fifteen seconds. And don’t forget to dry your hands also; bacteria loves moisture. And don’t recontaminate yourself on the door handle as a result of those unhygienic people before you. Look, I know this is starting to sound like a hassle, but it’s still less of a hassle than being sick. It’s not just for your own sake either; proper handwashing will decrease the number of sick days used by employees and students, boosting productivity.

What about antibacterial soap?

In theory, antibacterial (also known as antimicrobial) soaps bring the benefit of killing bacteria in addition to the oil-yanking properties of regular soap. The idea is that if you don’t get every last microbe off of your hands, there’s a decent chance that it died in the process anyway.

That said, antibacterial hand soap is currently a hotly debated topic. As recently as September of 2017, the FDA no longer allows 19 previously common chemicals for use in consumer antibacterial hand soaps, claiming that studies have not adequately proven their benefit over regular hand soap.2 (This doesn’t apply to soap used in healthcare settings, by the way.) Part of the debate also stems from the global health concern of treatment-resistant bacteria. By killing microbes all willy-nilly, the lucky 1% of immune bacteria is free to reproduce until that extra resistant kind is the new norm. As of now, studies are still being performed on the effectiveness of other antibacterial soap chemicals. But then again, there’s this study3 from 2008 which certainly seems to show antimicrobial hand soap causing a reduction of bacteria around double that of regular hand soap. 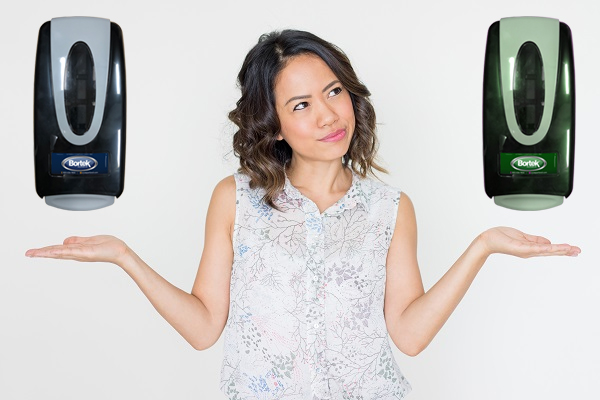 On the one hand, there’s antibacterial soap, but on the other hand…

In other words… science is complicated. The infectious diseases that can be prevented with handwashing can be caused by any number of different kinds of bacteria and viruses. Those bacteria and viruses can behave in a variety of different ways depending on conditions. Then there’s different chemical types to account for, the length of time spent in contact with the chemical, varying scrubbing and drying methods, and more. The important thing is washing your hands correctly, regardless of whether you use antibacterial soap or non-antibacterial soap. If you want to opt for the antibacterial soap to cover all your bases, go for it.

How to wash your hands

I just scrolled to the bottom for the summary, so…?