Of the ten categories of violations cited most by OSHA in 2017, four of them relate to falling hazards (Scaffolding, Ladders, and Fall Protection General Requirements and Training Requirements.)1 Statistically, a fall from a height of 48 feet has a 50% mortality rate, but even a fall from less than six feet can be fatal in certain circumstances. Of course, nonfatal falls frequently result in serious injuries as well, which are both costly and painful.

Comparing the number of cited ladder and scaffolding violations, the latter outnumbered the former, the ladder. However, as the ladder sees more daily use than the latter by load-laden laypeople, I’ll be focusing on the former. With these tips, both ladies and lads will be able to follow ladder law to the letter.

According to the CDC, there are five major causes of ladder fall incidents.2

It’s little surprise that this one is often overlooked. Even if you were to know the regulation details, you’d need at least one high school algebra student on staff to decipher them. The relevant regulation, 1926.1053(b)(5)(i), explains that “non-self-supporting ladders shall be used at an angle such that the horizontal distance from the top support to the foot of the ladder is approximately one-quarter of the working length of the ladder”. That is, of course, unless you’re using a wood job-made ladder with spliced side rails, in which case you’re going to want to replace “one-quarter” with “one-eighth” in that explanation.

To put it simply, please observe the formula below: 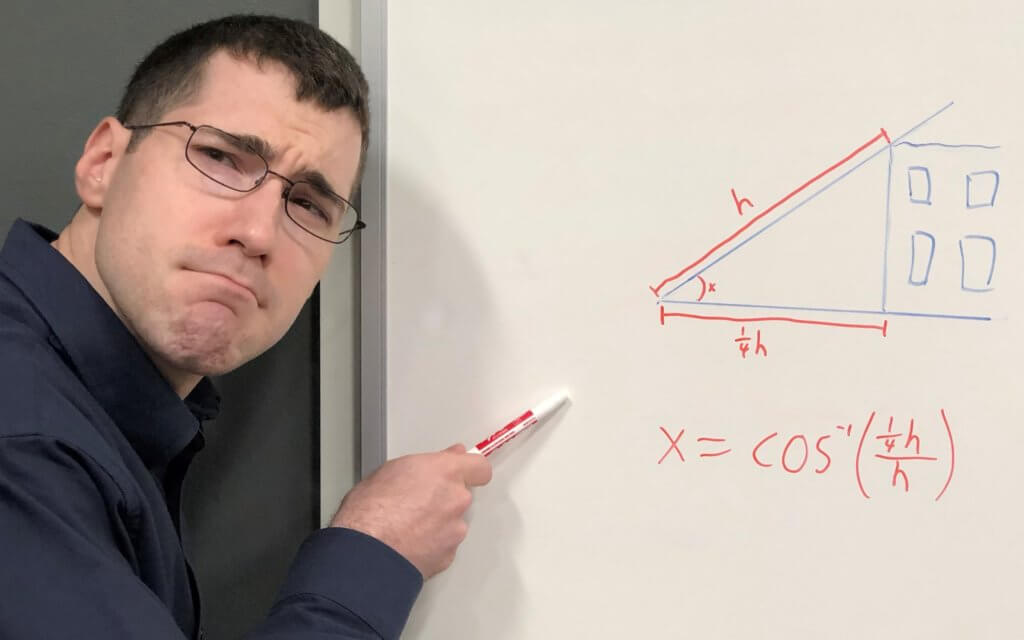 If the length of the ladder being used is 10 feet, you’re going to want to plug that in for h and use your calculator/phone to find that your angle should be 75.52°. If, on the other hand, the length of the ladder is something like 23 feet, you’d plug that in for h, and calculate that the angle should now be 75.52°. As one final example, if you were to have a ladder that was three inches tall, you would want to have it leaning up against the wall at an angle of 75.52°.
Understand? 75.52°.
Put it at 75.52°.

This one’s a bit easier to understand, but still easy to overlook. If you have a crappy ladder, it’s going to break under the weight of your body and/or load. In order to test the ratio of ladder crappiness to load weight, the OSHA regulation is to make sure the ladder can withstand the weight of four times the maximum intended load (or 3.3 times, in some cases). We’re still talking about extension ladders here, by the way. To test this, “transmit the requisite load to the ladder in a downward vertical direction when the ladder is placed at an angle of” – get this – “75 ½ degrees from the horizontal”. In other words, hang four times the stuff from the middle of the ladder when it’s properly set up, and if it doesn’t break, you’ve got yourself a sufficiently safe and non-crappy ladder.

Ladders always seem indestructible and eternal, especially metal ones, which are made from a combination of alchemy and magical incantations. (citation needed) 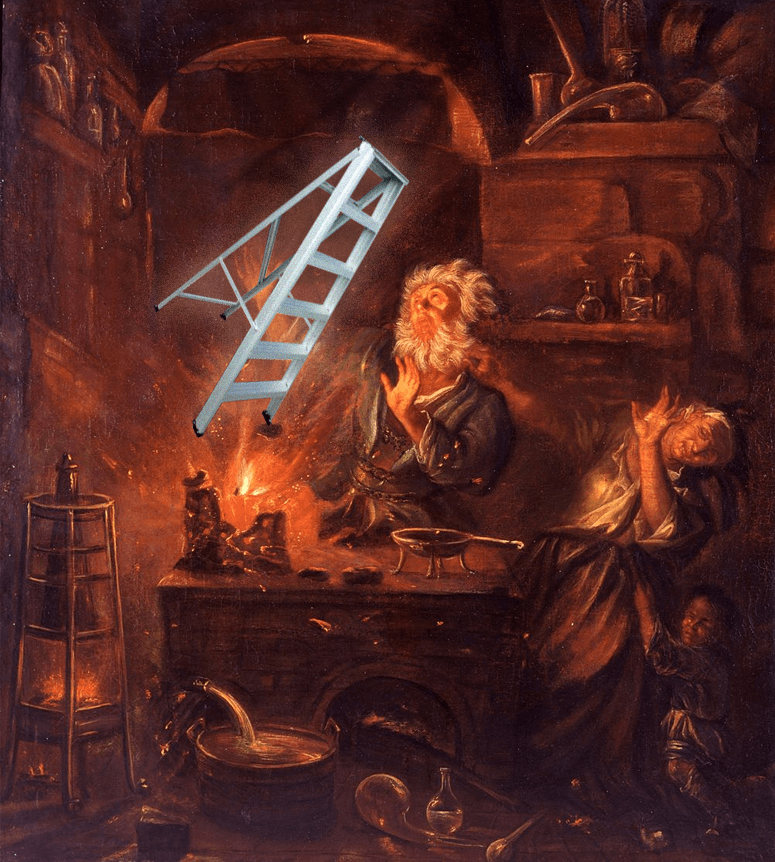 But over time, even the highest quality ladders can become unsafe due to heavy use or damage from an outside source. The regulation here is more general than the previous ones: Have ladders inspected for visual defects by a competent person periodically and after any incidents which may have caused damage. Other sources recommend checking ladders before each use, as well as more officially every three to six months, and if they’ve fallen or been dropped. If the ladder is found to be damaged in a way which affects its safety, it’s better to buy a new one rather than attempt to repair it. 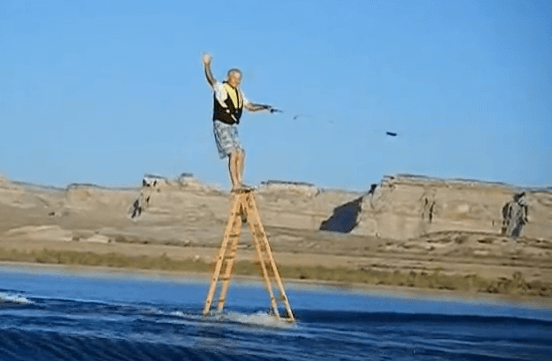 It is unsafe to stand on the top of a ladder as shown.3

Be careful and follow the rules! Falls and injuries often result from risky, lazy, and/or uninformed actions. Ladders should not be placed on slippery surfaces, and the ladder’s rungs should also not be dangerously slippery. Secondly, one should not carry objects up a ladder if they are likely to cause a loss of balance. It’s not just a matter of weight; depending on the situation, moderately heavy tools may be safe to carry, while a giant inflatable shark could contribute to a dangerous loss of balance even though it may weigh less. If adjustments need to be made to prevent overreaching or over-exertion of force, take the time to do it safely!

5. Lack of Access to Ladder Safety Tools and Information

Unfortunately, not everyone has the training or resources to know or follow proper ladder safety. This information is easy to research online, but that’s no help when grandpa’s always done it this way and never had a problem before. Consider printing ladder safety guidelines and giving verbal instructions ahead of time. That way, even ladder expert grandpa gets a refresher.

For infrequent jobs which require additional safety equipment, those with a smaller budget may be tempted try to save money at the expense of safety. In this case, they may wish to look into renting or borrowing the safety equipment for a more affordable way of staying safe.

When it comes to ladder safety and safety in general, investing the time and money to improve safety pays off in prevented accidents. Don’t wait for something to go wrong – implement safety training, equipment, and procedures from the start.