This question gets asked a lot by our municipality, shipping & warehousing, and manufacturing contacts. And rightfully so!

You want the machine that will clean your areas of responsibility and clean it perfectly. We want the same thing for you too. Asking which street sweeper is the best seems like a simple enough question, however, there’s quite a bit for us both to consider before we give you the right answer.

For example, a street sweeper that cleans up sand along roads that run along the beach in New Jersey may not perform nearly as well in a densely populated city like New York City where you’d primarily be sweeping up bulkier debris such as soda bottles, various paper products, rags, and, yes, even shoes. To complicate matters further, sometimes you’re charged with picking up both types of debris at the same time. All that said, let’s simplify this by laying out the main types of Street Sweepers that we carry. This is the first kind of street sweepers ever created– the first one popped up in the late 19th century, in fact. This type of sweeper is still around today because it works. These workhorses plow through bulky debris like it’s nothing and leave your streets clean and safe for public use.

There’s a couple caveats to choosing a Mechanical Street Sweeper. You need to decide whether you’re looking to get a chassis-mounted street sweeper or a purpose-built street sweeper (for an explanation of the two, scroll to the bottom of this info box). Both types work great in long-stretches of relatively straight roads. The Global M4 HSD (purpose-built) or Starfire S-4 (chassis-mounted) rentals that we have both travel at highway speeds (but must sweep at lower speeds) so those are great solutions for that type of application.

When it comes to sweeping a city or neighborhood, there’s a little more to consider. Chassis-mounted sweepers tend to struggle with those scenarios due to the limitations of the truck chassis. Purpose-built sweepers shine in these situations, though– especially the three wheeled sweepers (like the Global M3). They can take corners sharp and get every bit of debris in its path.

Keep in mind that for machines like the Dulevo 6000 or the Global M3, their top speeds are in the 25mph range. With that said, consider the machine your operator is using. Traveling at city speeds like this is not only practical, it’s also safer (accidents due to speed are much more likely to happen in a chassis mounted sweeper). Street Sweepers do not handle like your typical personally owned vehicle (POV) or bobtail truck. They’re bulkier and have giant brooms mounted to them. Having a lower maximum speed ensures that your operator can safely operate the machine and, while traveling to a destination, has plenty of reaction time to make use of when pedestrians (to include children), bicyclists, and cars cut in front of them or come out of nowhere– ensuring the operator, their employer, and the equipment does not suffer any unnecessary damages. 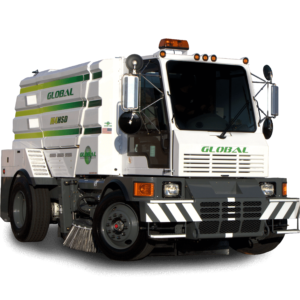 These Street Sweepers are, as the name implies, built from the ground up with the main goal of creating a machine that cleans your streets.Their chassis-mounted brethren are built with the same goal, but unfortunately, they’re forced to sacrifice in some areas due to the multitude of limitations the truck chassis poses.

Machines like the Dulevo 6000 also has the advantage of being able to be tuned to perfection when it comes to sweeping. This machine, being a purpose-built sweeper, has all four wheels turn at the same time, ensuring you can complete sharp turns without missing any debris on the road.

Another huge benefit to purpose-built sweepers is the main brooms are directly behind the side gutter brooms. This, by its very design, leaves little to no room for debris to be missed while you’re turning your machine around in a cul de sac or dead end. Not only does it ensure maximum debris pickup, they tend to have much a sharper turn-radius than chassis-mounted sweepers.

The image below was made for a municipal customer who asked about why his chassis-mounted sweeper leaves so much debris behind during a tight turn around in neighborhoods– just to give you an idea of what kind of debris pickup you can achieve in a very tight turn-around area with a purpose-built sweeper. You would have zero issues in areas that allow for wide turns, this is really just so you can see how the placement of the rear broom really helps in this sort of situation. See the Chassis-Mounted tab below for a comparable situation. 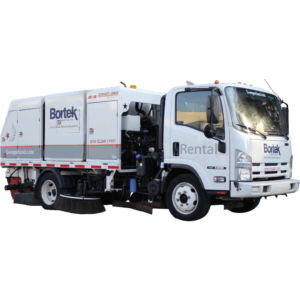 These Street Sweepers have the main body of the sweeper designed to be mounted to a truck chassis– typically an Isuzu or Freightliner (or similar). That means that the design itself is forced to be created with the limitations of the chassis itself. For example, the chassis must remain intact so the main broom has to be mounted to the rear of the sweeper. For long, straight roads, this poses no issues. With that said, if you’re sweeping roadways with a lot of sharp turns, like the ones you’ll find in densely populated cities, this may not be the best bet for you.

We don’t mean to discourage you, by any means, especially if this is what you’re looking for. We’re simply making you aware of some aspects you may wish to consider. These chassis-mounted street & parking lot sweepers are fantastic solutions for folks looking to clean up highways or major roads or for those of you who are in need of a relatively affordable machine to keep your manufacturing plant areas up to snuff regarding your cleanliness standards.

The image below was made for a municipal customer who asked about why his sweeper leaves so much debris behind when he’s forced to make a sharp turn around in a cul de sac. The gap left between the main broom and gutter brooms are the culprit, unfortunately. Again, this is not an issue if you’re sweeping large stretches of relatively straight roads, just be aware that in-town, this could pose a problem.

For street sweeping applications, debris mostly collects within three feet of a curb line, and the need for a vacuum sweeper came about as a result of that fact, as they are specifically designed to collect debris within that area. That’s where street sweepers come in.

Ease of design and the ability to reach minute spaces is a feature to look for when choosing a sweeper. Regenerative air sweepers employ a blast and suction effect, which has proven more effective in cleaning those hard to reach places that a vacuum sweeper cannot get. The regenerative sweeper’s blast force is able to reach and clean the entire area the sweeper is trying to cover.

The ability to pick up heavy debris is a major issue when picking the right sweeper truck. Regenerative air sweepers have the ability to do so because of their “blast and pickup cycle” which means water is introduced into the intake, dislodging and moving any dust that forms in the hopper. The blasting also prevents heavy debris from getting caught.

Regenerative air sweepers have the ability to clean a large path, can remove smaller debris more efficiently than mechanical sweepers and release less exhaust and particulates back into the environment. In fact, regenerative air sweepers are more environmentally friendly than any other type of sweeper because they do not emit as much particulate, polluted air back into the environment. An added bonus is the fact that they have the ability to pick up the smaller debris, as well, making them a quality choice.

Regenerative air sweepers are suitable for almost all everyday road sweeping needs. In addition, they are relatively cheap to maintain, and because of their cost effectiveness and versatility, they are the sweeper truck-type of choice for many municipalities and government agencies. That is not to discount or disregard mechanical sweepers. They are a great sweeper truck option for applications such as street sweeping, construction, and airport runway applications, as well. Whether purchasing a regenerative air sweeper or a mechanical sweeper, it is important to assess the type of applications it will be used on and ensure you make the right purchase to get the job done.

Get the best of both worlds with Dulevo street sweepers. The Dulevo 5000 Evolution & 6000 Revolution Street Sweepers are purpose-built machines designed to maximize your sweeping ability and efficiency. You get all the benefits of the mechanical sweeping with the added benefit of vacuum suction, further increasing your dust control. These sweepers filter out PM10 particulates while you’re cleaning your streets and/or facility (unlike this Tymco sweeper).

If you’ve gone back and forth between using mechanical over regenerative air sweepers, or vice versa, and still can’t quite clean as effectively as you need to, definitely check out these Dulevo Sweepers. We’re more than happy to demonstrate this machine at your facility, that way you can see for yourself how great these street sweepers truly do perform. 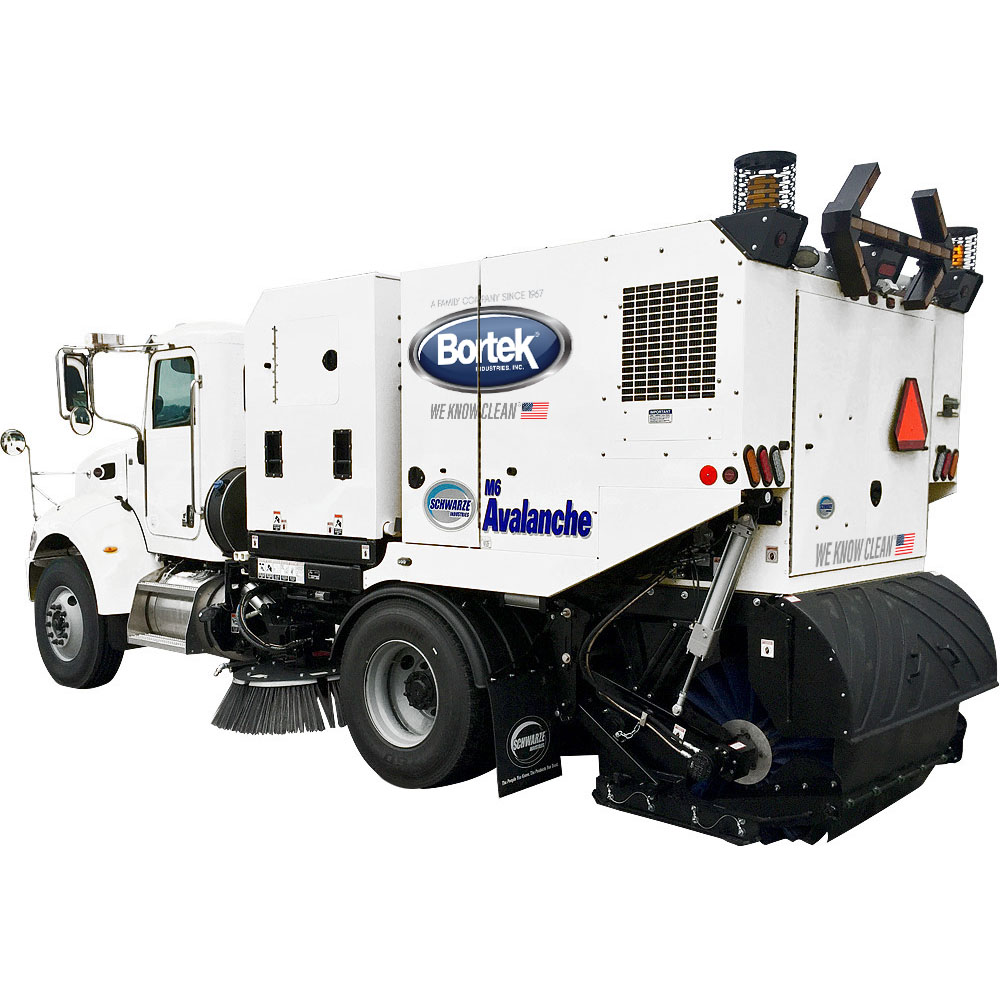 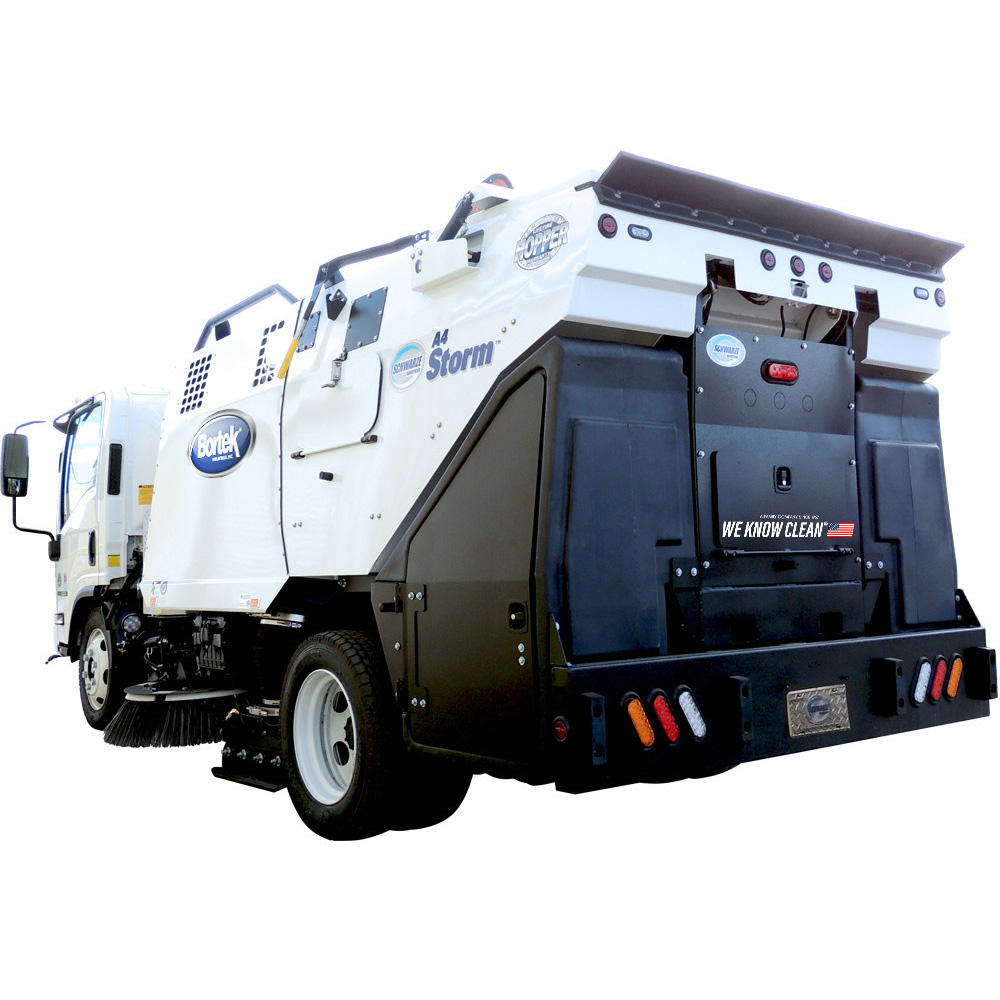 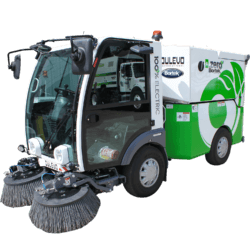