Application: Routine deep cleaning of parking lots/garages with over 2,000 spaces.

Purpose: To provide thorough green cleaning without the use of chemicals, and to reduce labor hours while increasing productivity.

Lindbergh Plaza is known as one of Atlanta’s premier shopping destinations. With 26 acres of retail shops, parking lots and sidewalks, it is a plum contract for a cleaning professional like Michael Caruso, co-owner of Atlanta-based Amerisweep, LLC since January 2009. Amerisweep specializes in cleaning parking decks and surface lots, and shortly after Caruso joined the company in early 2008, he decided that the walk-behind pressure washers that Amerisweep had been using were too labor-intensive for big cleaning jobs. A few months later, Caruso began using the Advance Cyclone 4500, a high pressure surface cleaner from Advance, and contracts like Lindbergh Plaza were finally within his reach.

Rather than losing revenue by sub contracting large jobs to other cleaners, the Cyclone gave him the capacity to complete jobs of nearly any size. His old walk-behind equipment, for example, limited him to cleaning areas with 500 or fewer parking spaces. With the Cyclone, Caruso needs less manpower and has completed jobs that include as many as 7,500 spaces, and he routinely cleans others with more than 2,000 spaces.

In addition, the Cyclone 4500 allows Caruso to clean in a green manner because it reclaims and filters the water used during the cleaning process. That is a near-necessity in Georgia, where drought has made water into a precious resource. But property managers and other potential clients in general are becoming increasingly sensitive to cleaning in an environmentally friendly way, Caruso says. Of course, they also expect high levels of cleaning performance.

“No matter what the surface,the Cyclone provides deep and thorough cleaning. That’s important to me, because when the places I’m cleaning look good, my clients look good.”

The Cyclone was instrumental in landing Caruso the Lindbergh Plaza contract. There is heavy foot traffic at the property, given its abundant shopping and entertainment venues. Plaza managers were reluctant to have the sidewalks cleaned more than once a year because traditional pressure-washing equipment left water on the ground and created an unfriendly and messy environment for shoppers. The combination of the Cyclone’s cleaning ability and water reclamation attributes, however, catapulted it from an annual job to a quarterly one.

“Environmentally, it gets me into a lot of these big properties, because that’s what they are looking for,” Caruso said. “The Cyclone has increased our bottom line dramatically, because now we are able to do all of the cleaning jobs in-house. Plus, I can do jobs for the same price as other cleaners, and I am being green. It has increased the percentage of jobs I am getting versus not getting because nobody can compare to what I do.”
“The fact that the Cyclone doesn’t need to be hooked up to an outside water source is what impressed me the most. In addition, it doesn’t have a big trailer or umbilical cord, so it’s very maneuverable.” 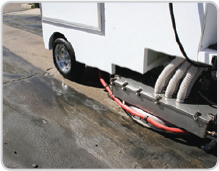 Knowing what he did about Georgia’s water situation and potential clients’ environmental desires, Caruso searched specifically to replace his old walk-behind equipment with a machine that would increase his productivity, as well as filter and recover water. While looking at another machine – Clean Up America’s Swabby 48 pressure washing system – on YouTube, Caruso noticed a link for the Cyclone and clicked on it (search “Advance Cyclone 4500” on YouTube)

Impressed by what he saw, he did further investigation into the machine, including a trip to the factory where Cyclones are built. He bought one on the spot.

“Because I have a lot of experience with pressure washing, after seeing what else was out there, the Cyclone made the most sense,” Caruso said. “The fact that the Cyclone doesn’t need to be hooked up to an outside water source is what impressed me the most. In addition, it doesn’t have a big trailer or umbilical cord, so it’s very maneuverable.” As a result, Caruso can clean without having to stop to move around hoses and other equipment. He figures he saves two hours per job that he otherwise would spend on such activities.

After the switch to Cyclone, labor requirements were reduced

Whereas Caruso used to employ two crews of two to three people apiece, a single two-person crew now meets his labor needs. One person rides the Cyclone 4500, which can operate at speeds from ten feet per minute to five miles per hour, while the other person cleans corners and other tight spaces.

The reduced labor requirements have played a part in increasing Caruso’s bottom line. “I’m now doing the same amount of square footage as I was doing when I had two crews of two to three people each out there,” he said. 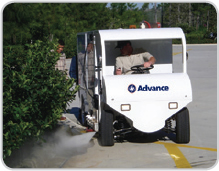 “You just get on it, start it up and ride. Everything is right there on the machine.”

Caruso cleans a variety of outdoor surfaces with the Cyclone, from sidewalks with dirt on them and wear and tear from foot traffic to parking structures with large oil stains. The machine’s patented cleaning and recovery head spins hydraulically and tips down to within one-quarter inch of the ground, so it is effective on flat surfaces, as well as the uneven surfaces common in the outdoors.

Clients have high expectations for cleanliness, Caruso said, since it can directly affect their bottom line. If a parking garage isn’t clean, for example, customers will opt to park somewhere else. The Cyclone, which doesn’t require chemicals or detergents, has a 34-inch cleaning path and heats water to 160 degrees F before deploying it at 4,000 pounds per square inch.

But cleaning ability alone sometimes isn’t enough. In one instance before he began using the Cyclone, Caruso nearly lost a client because his walk-behind equipment left too much water on the ground. The Cyclone, in contrast, features a closed-loop system that reclaims water and filters contaminants out of it before it is recycled and reused. The machine holds water in six corrosion-resistant 40-gallon tanks. Three tanks hold water; the other three are used to reclaim and recycle water.

In addition to helping Caruso comply with storm water runoff environmental standards, the Cyclone 4500 saves on water use. In situations where other machines use 4,000 to 5,000 gallons of water, Caruso uses 300 to 500 gallons. At Lindbergh Plaza, which includes such companies as AT&T Wireless, Home Depot and Target, he has cleaned for three days and used 500 gallons of water without having to change it. For many of his customers, like those at Lindbergh Plaza, water conservation is becoming an increasingly vital part of the cleaning process.

“When you are going in with a green machine and can do the job for the same price – and basically you are collecting the sludge that would normally go into the drains – no one else can really compare to that.”